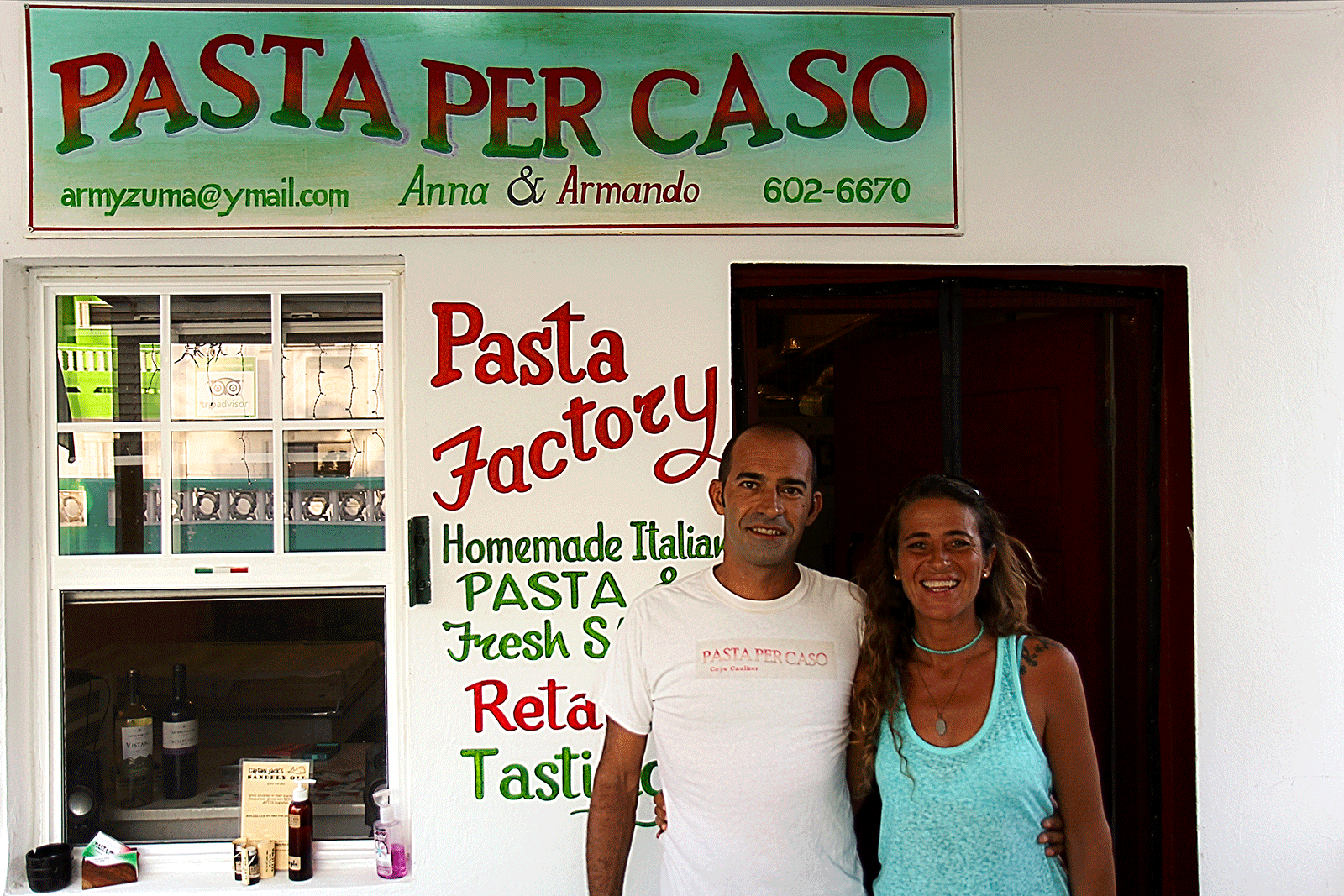 A little over a year ago, Caye Caulker, one of the most beautiful islands in Belize, has welcomed a piece of Italy. A small meeting place where you can enjoy pasta, prepared fresh every day, and traditional sauces which are simple and genuine. Armando and Anna run it since 2013 and called it “Pasta per caso” (pasta by chance), to recall the coincidences that brought them from Italy to this little tropical paradise.

When I enter the kitchen of “Pasta per caso” I abandon the heat, sun and turquoise sea of ​​Belize. Here, in a little over 15 square meters I find an authentic and original piece of Italy: the machine to pug and draw pasta, the spaghetti which are produced incessantly, fusilli and tagliatelle that rest drying ready for the evening meal…everything pushes the tropical air even further over the threshold. “And the sauces? “ I ask Armando, the owner of this microcosm set in the Caribbean “My wife Anna is the cook; I have no say, I’m the pasta man! “ he answers with a half smile, without looking away from the umpteenth portion of spaghetti coming out from the press. 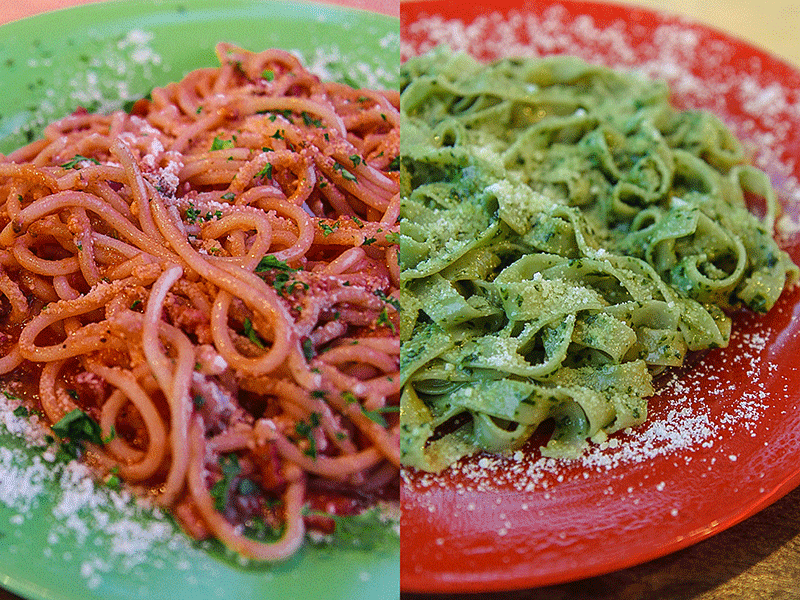 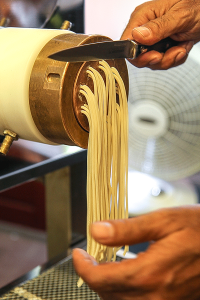 I have a chat with Armando, who was born in Sardinia and grew up in Verona, take a couple of photographs and observe him: he seems meticulous and well-organized “It took me 10 days to find the right dose for the mixture, now I’ll never change it!” he tells me, confirming my impressions. Everything is well planned out, in contrast with the story that in August of 2013 brought the “pasta man” and Anna to open their restaurant in Caye Caulker. As often happens when I meet an Italian on the run who has realized his dream of opening a successful business away from their own country, Armando and Anna occupied themselves quite differently before beginning their adventure in Belize. “We met in Nigeria, I worked at the Italian Embassy, ​​Anna managed the catering administration for a large construction company” reminisces Armando, who spent 24 years in aviation before taking leave the previous year. “When I returned to Italy, I could no longer endure the routine, the cold, the costs…in my job I felt like a number; professionally it was as if I had gone backwards 15 years. As soon as I could, I would go back to visit Anna in Abruzzo”. It was essential that some sort of change take place. The opportunity presented itself during a vacation in Belize “I came here alone, I had met Anna only recently; three days after I sent her a ticket – you have to come! – I told her. After the first trip, immediately a second longer one, in the midst of acquiring a piece of land, leaving my job in Aviation and the knowledge of having found a place in which to build something. The initial project was to produce and sell fresh pasta to the restaurants in Caye Caulker and in nearby islands. “But then our friends encouraged us to open a real restaurant; the very first night we served 36 people”. 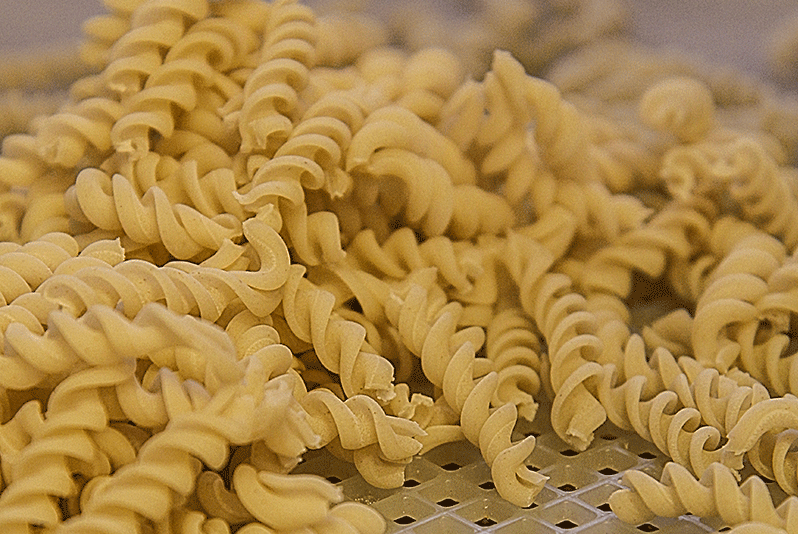 The offer is simple, two first courses, one of which is always vegetarian, dessert and coffee, prepared with an Italian moka. “My food is genuine, here you eat like you’d eat at home”, explains Anna. “The products we use are seasonal, and depend on what the market offers”. Fusilli, tagliatelle and spaghetti made with flour and water, sometimes egg pasta: lasagne and ravioli, “today we’re making Amatriciana and Genovese Pesto, yesterday we made Gricia and Norma, tomorrow, who knows? Pass by, read the menu and if you like it you sit down, otherwise you come back tomorrow”. Since “Pasta per caso” opened, many people have chosen to sit down: in the first year of business Armando has registered nearly 9000 customers. “This place has become a meeting place for tourists, Italians, foreigners and expatriates” explains Armando, and I can see this for myself when I come back in the evening for dinner. Two large tables that serve a total of 12-15 people; you eat next to other people and this favors conversation. In front of the main road of the island, reggae music, bare feet and sea air. A place where stories are told while you eat as if you were “at home”: Anna’s promise is maintained, the food is simple and the flavor comes from 10000 km away. Coffee, dessert, and the fateful question: could you have opened a place like this in Italy? “absolutely not” is the answer given by both Armando and Anna. “Taxes and regulations would have strangled us before even being able to inaugurate the restaurant”. “I know,” adds Anna, “years ago I ran a jazz club, it went well, we served 150 people for cocktails and at the end of the month there remained just enough money for us to survive, working day and night with the risk that everything fall apart at any moment. Now when we travel, even in Italy, it is Caye Caulker that we call home. Let’s go home, we’ll say.” 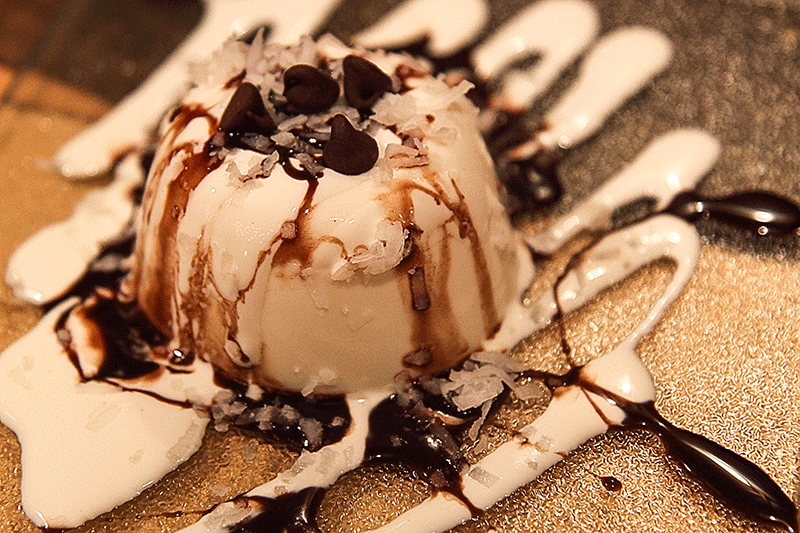 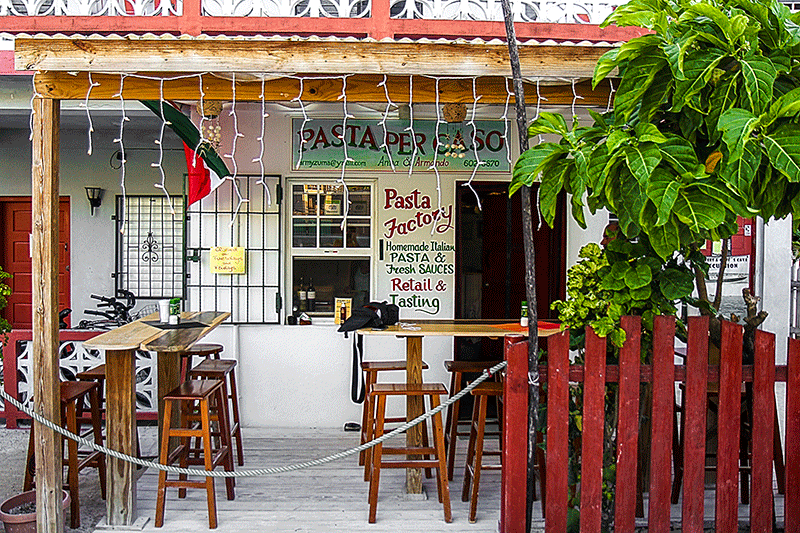 PASTA PER CASO ON TRIP ADVISOR