This Salmoriglio tuna steak recipe hides the story of a fantastic day on the Island of Favignana, in Sicily. Last June my wife Caterina and I spent a few days on the Aegadian Islands. One day we have been so lucky to have a day on the boat of the famous Italian fisherman Gioacchino Cataldo. Gioacchino has been a pleasant guide bringing us to explore the Island and cooking for us this delicious tuna steak recipe. On the contrary of the classic Salmoriglio marinate, the seasoning is made directly in the pan. The tuna is quickly seared on both sides, then seasoned with lemon juice and oregano: a simple, quick, and tasty recipe! 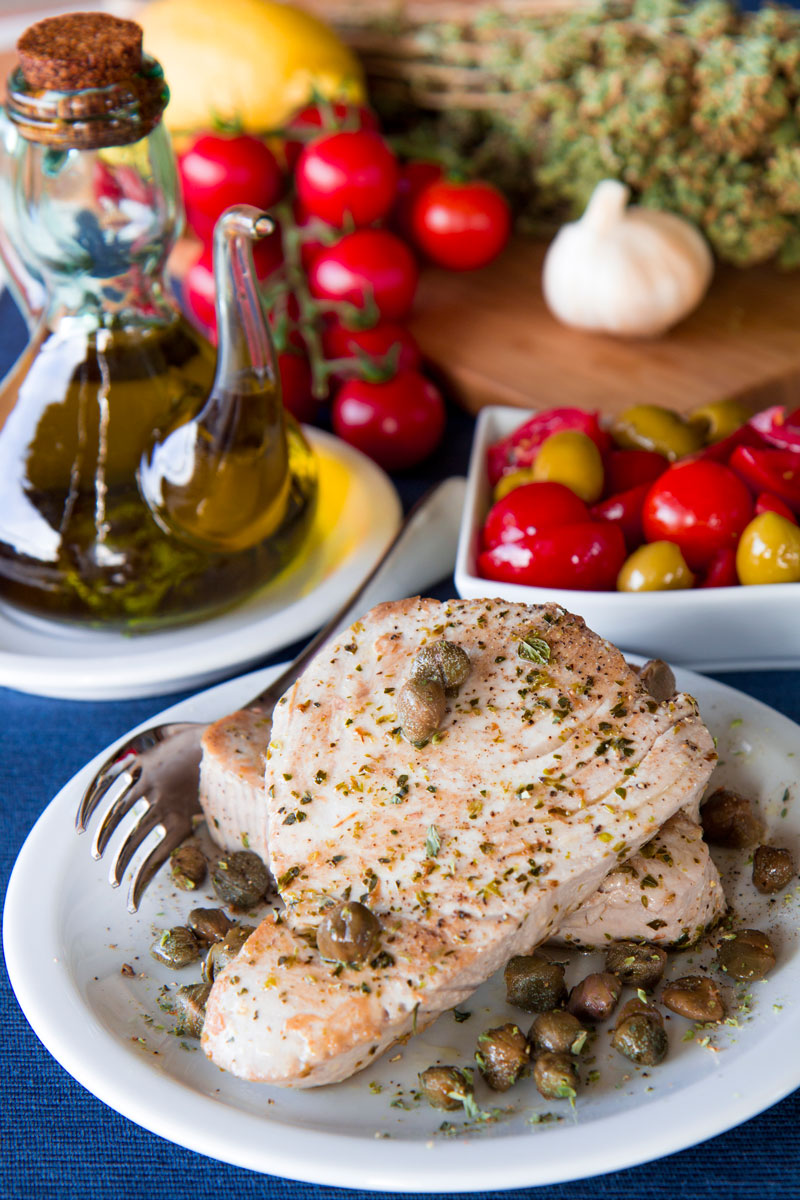 ON THE GREENISH BLUE

In a day of June, abnormally hot, the ferry cut the scorching air bringing us toward the heaven: Favignana, the main of the Aegadian Islands (Isole Egadi) crests the horizon. Moving closer to the Island, the deep blue water changes into a color palette from bright green to greenish blue. This spectacular sea drives our minds to the tropical regions, but we are just in Italy, a few miles far from Trapani.

This is Sicily: a territory where plenty of the most amazing places of the world are depict in a few miles of land and water! 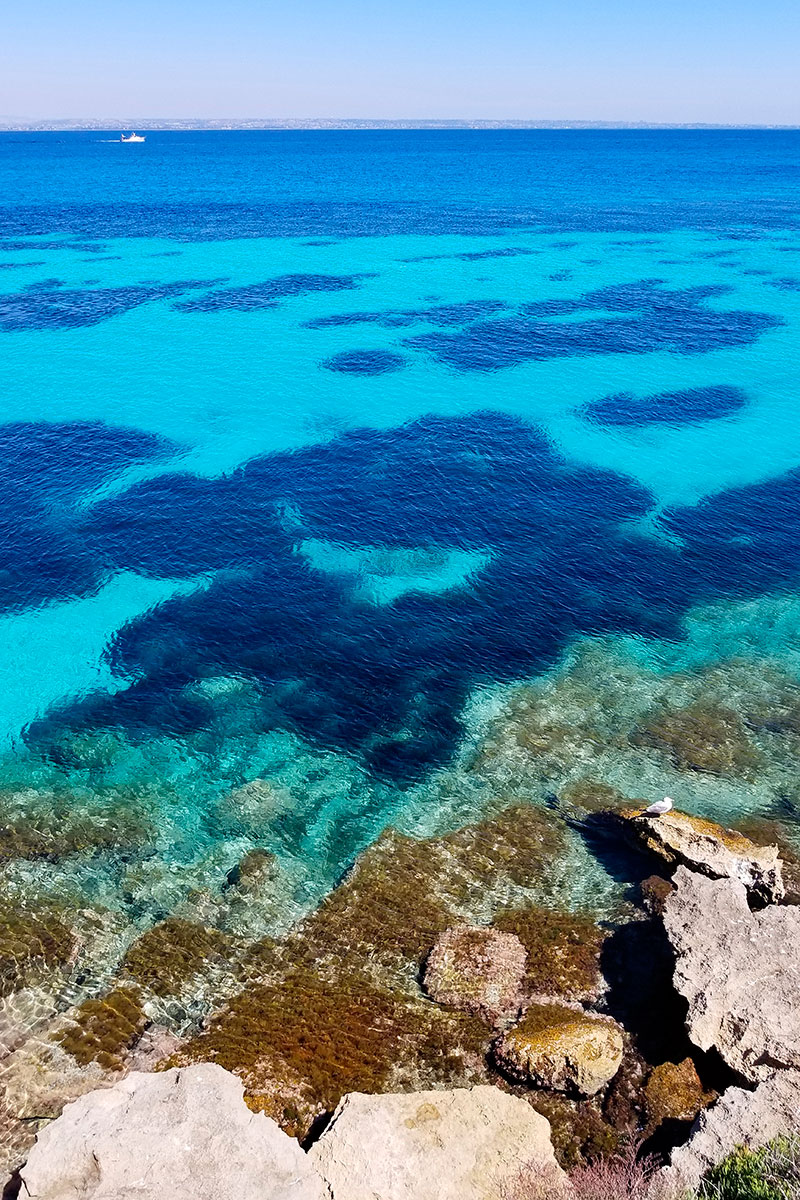 TUNA FISHING IN SICILY OVER THE CENTURIES

The Island of Favignana has been inhabited since the Upper Paleolithic and conquered over the centuries by Phoenicians, Romans, Barbarians, Saracens, Normans, and Spanish.

Since the time of Phoenicians, tuna fishing has been one of the most important business in Sicily. The Romans used to set a snare composed by a nest of fishing nets on the marine currents to catch the fish. 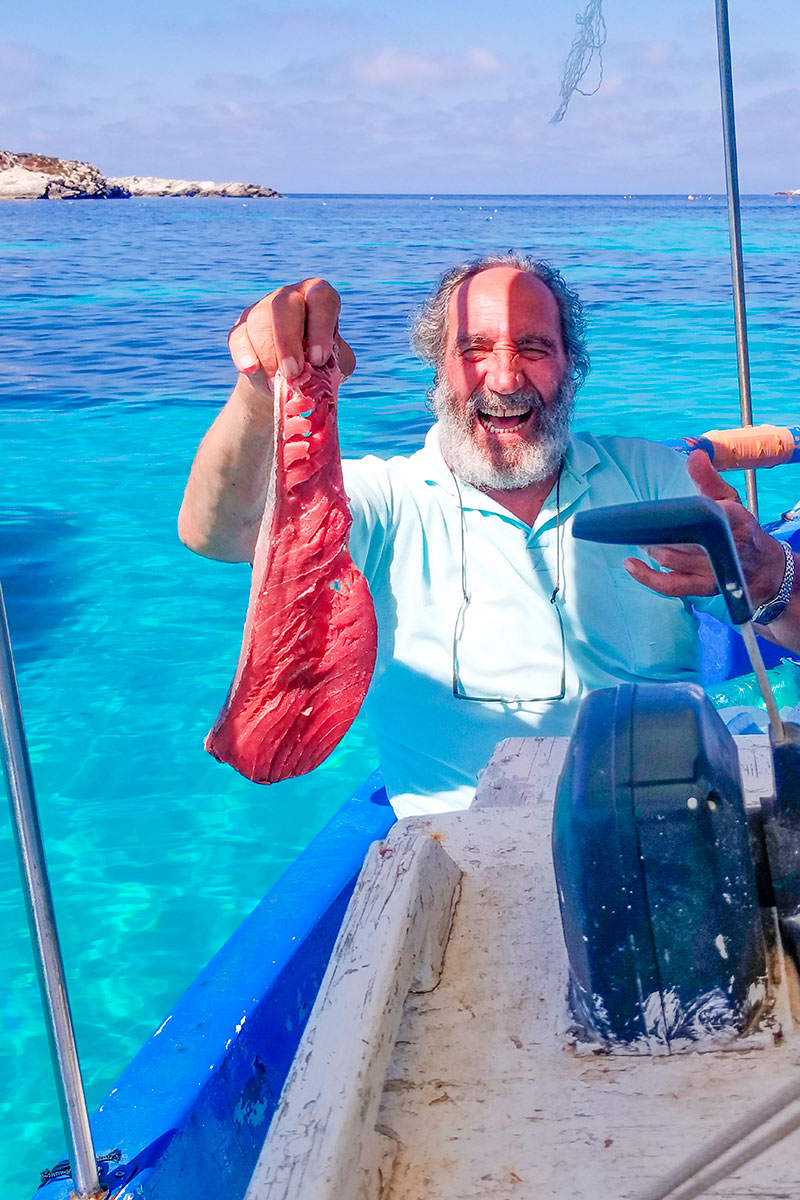 The tuna fishing revolution came with the Saracens occupation. Inspired by the Romans, the Arabs improved the previous technique: a system of connected cages built with nets where the tunas are forced to enter. Once the last tunas are entered the seamen close the last cage, called Camera Della Morte (Death Room). At this point the fishermen start the Mattanza, killing the fish and raising them on the boats organized around the cage. The entire Mattanza process is coordinated by the fishermen’ chief named Rais. 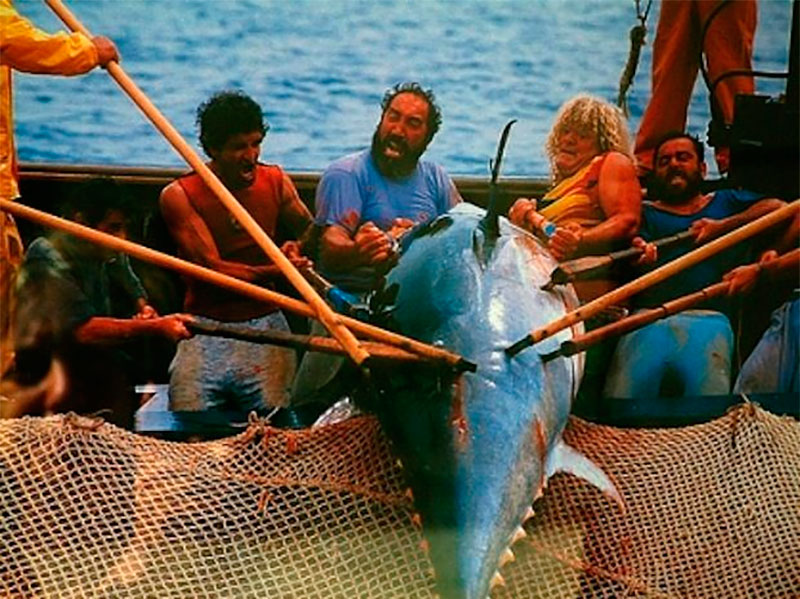 AN ENTERPRISING FAMILY AND THE KING OF THE SEA

The Greek historian Strabone nicknamed tunas “the pigs of the sea” because, like his terrestrial brother, is used in all its parts. Luckily for Tuna, Hemmingway give us a more romantic definition, calling it “the king of the sea”.
The changing fortunes of tunas and Favignana have been linked: for centuries, the tuna fishing has been the primary asset of the island. But, the critical improvement in the commercialization of the fish production has been introduced by a rich family originating from Calabria: the Florio. 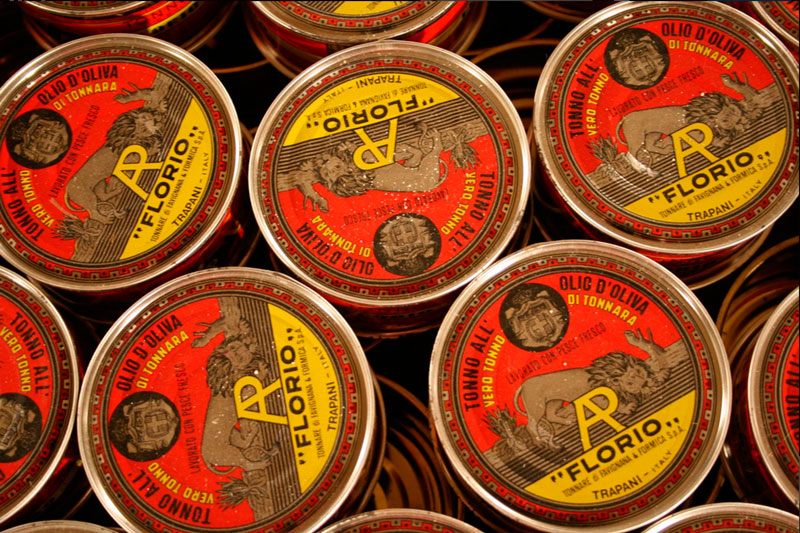 Ignazio Florio Senior acquired the Aegadian Islands in 1874, and subsequently the industrial plant in front of the harbour of Favignana, using them for the processing and canning of the tunas. The main innovations were the preservation in oil for the first time ever instead of the traditional salt, and a new type of can made with metal sheet presented at the World's fair in Tasmania. Today these techniques could appear obvious, but at that times they represented an authentic revolution in the food industry.
The Florio family led the Tonnara of Favignana until 1937 when they were forced to sell the company at the Parodi family. Before selling, Ignazio Florio Junior tried any different option, including selling his wife’s pearl necklace 7 meters long! 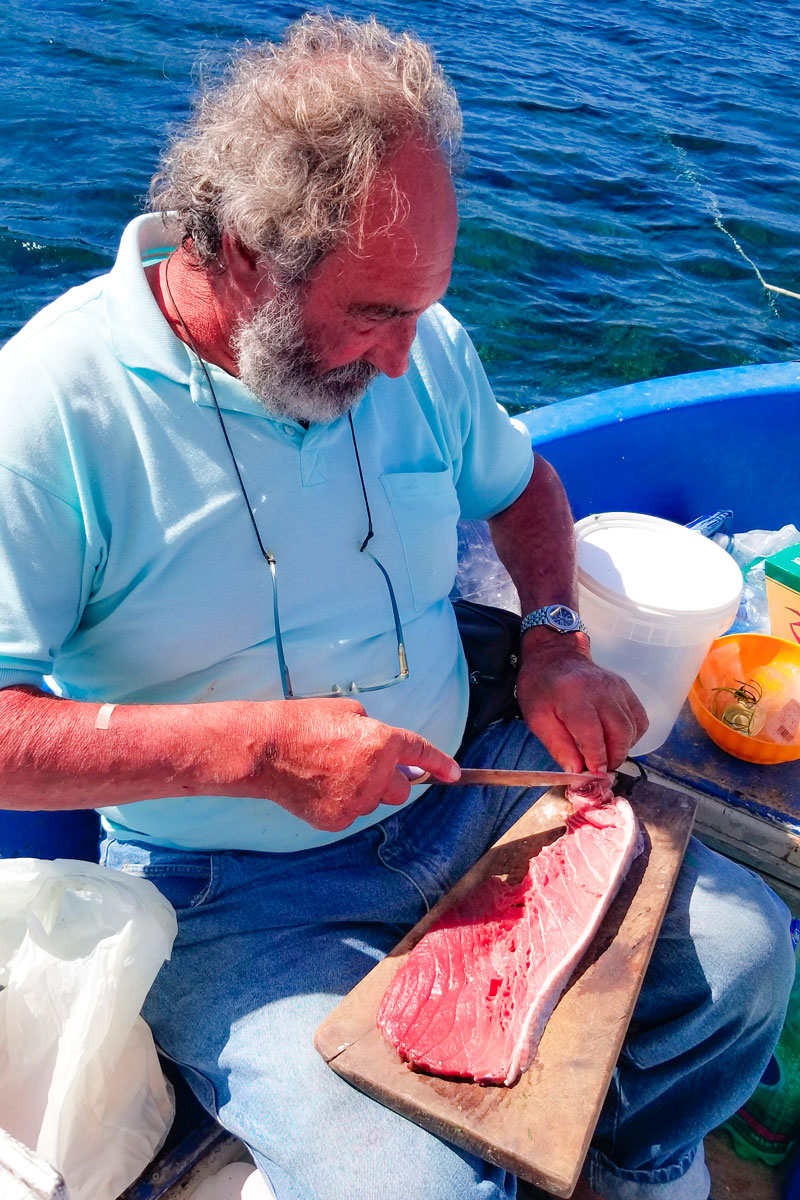 The morning after our arrival, My wife Caterina and I reach the little port of Punta Longa in the south part of the Island. We are looking for a man, but in front of us crests a human mountain: Gioacchino Cataldo welcome us on his boat. Thinking about Gioacchino, the first things that come to my mind are his gigantic hands: I’m 6 feet tall, but under his shadow, I just disappear!

Gioacchino speaks slowly, a mix of quietness and authority, like a man used to be heard. At present days, Gioacchino Cataldo brings the tourists around the island and makes them aware of the wonders and the history of Favignana. But, Gioacchino is not a conventional guide, he has been the last Rais of Favignana, until the last Mattanza in 2007.

Sharing the boat with Gioacchino means sharing the secrets of the island. The boat proceeds slowly and the time does the same articulated by the stories of the old sailor: the rise and decline of Florio family, the tuna number every year smaller, and the Tuna quotes that regularize the quantity of fish that can be caught. After several bad seasons, the tunas are repopulating the Sicilian sea, Gioacchino says staring the water, a new hope for a better future for Favignana. 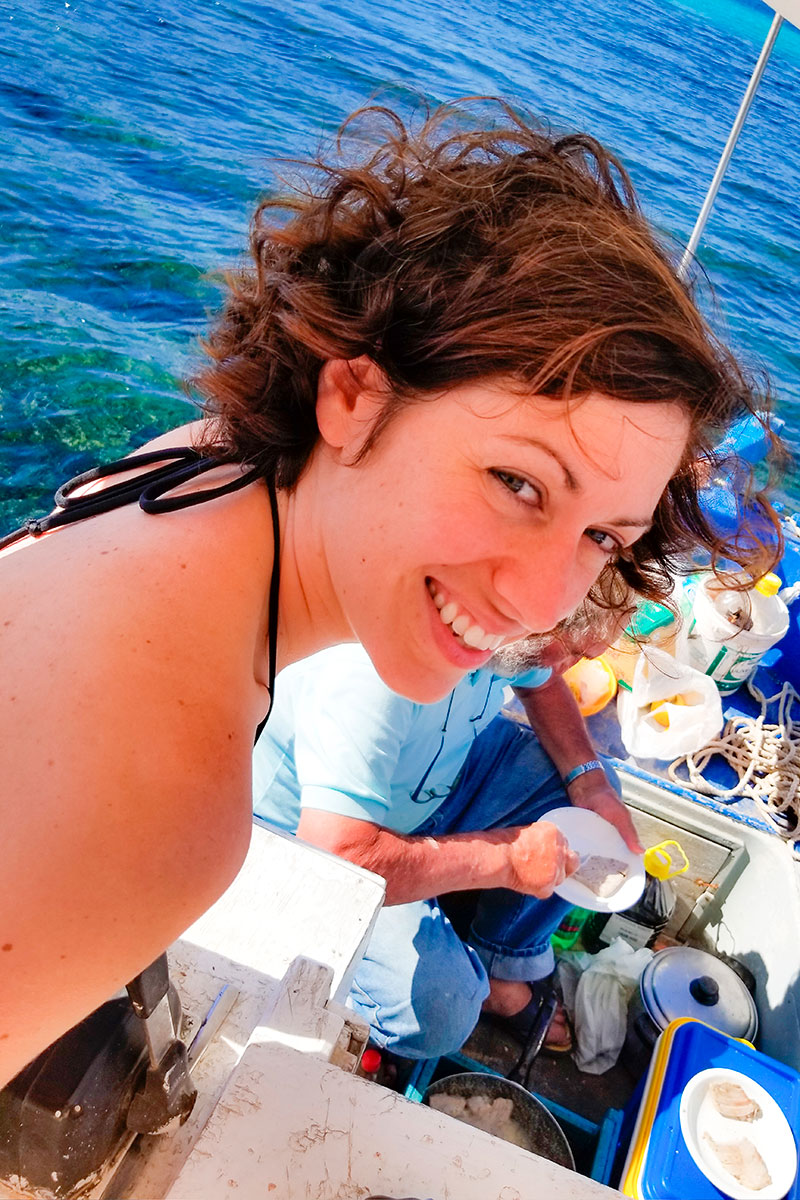 A LUNCH ON THE BOAT

The day flows through dives into the blue water, salt and sun on the skin, and glasses of Malvasia wine. Gioacchino seat at the wheel, a little space where he also settled an ingenious kitchen.

The tuna is the protagonist of our lunch. We start with Lattume, a local delicacy. Lattume is the tuna's milt, traditionally sliced and pan fried: the proof that Strabone was right, in the tuna nothing can go to waste! 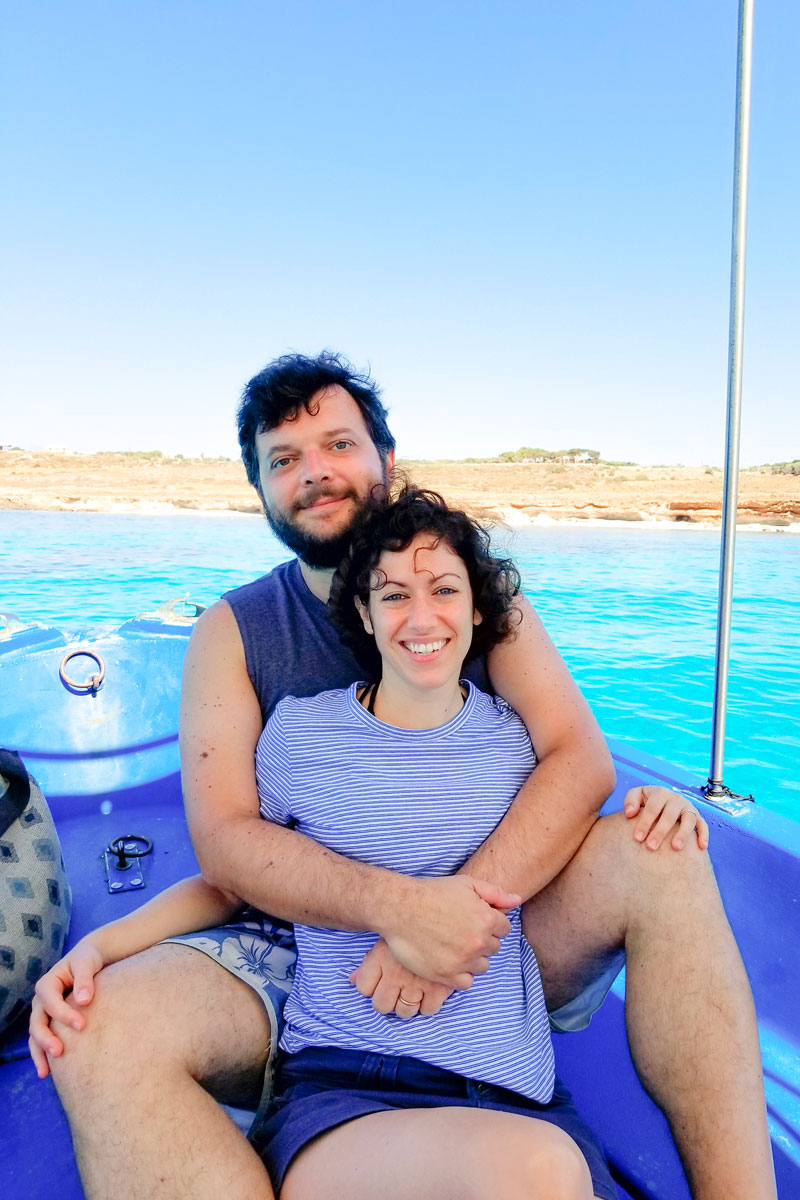 After a generous portion of pasta with tomatoes and capers, Gioacchino prepares the main dish: thick slices of fresh red tuna seared and seasoned with lemon juice, olive oil, and oregano. This is local tuna, with a natural red color and taste: so tender and delicious!

As the day draws to a close, the boat comes back to the harbor. Caterina and I land to the pier, sated by sun and fish. It's time to say goodbye to the old fisherman: Gioacchino's hand swallows ours, and his smile sounds like a see you soon. What a day we had in Favignana! 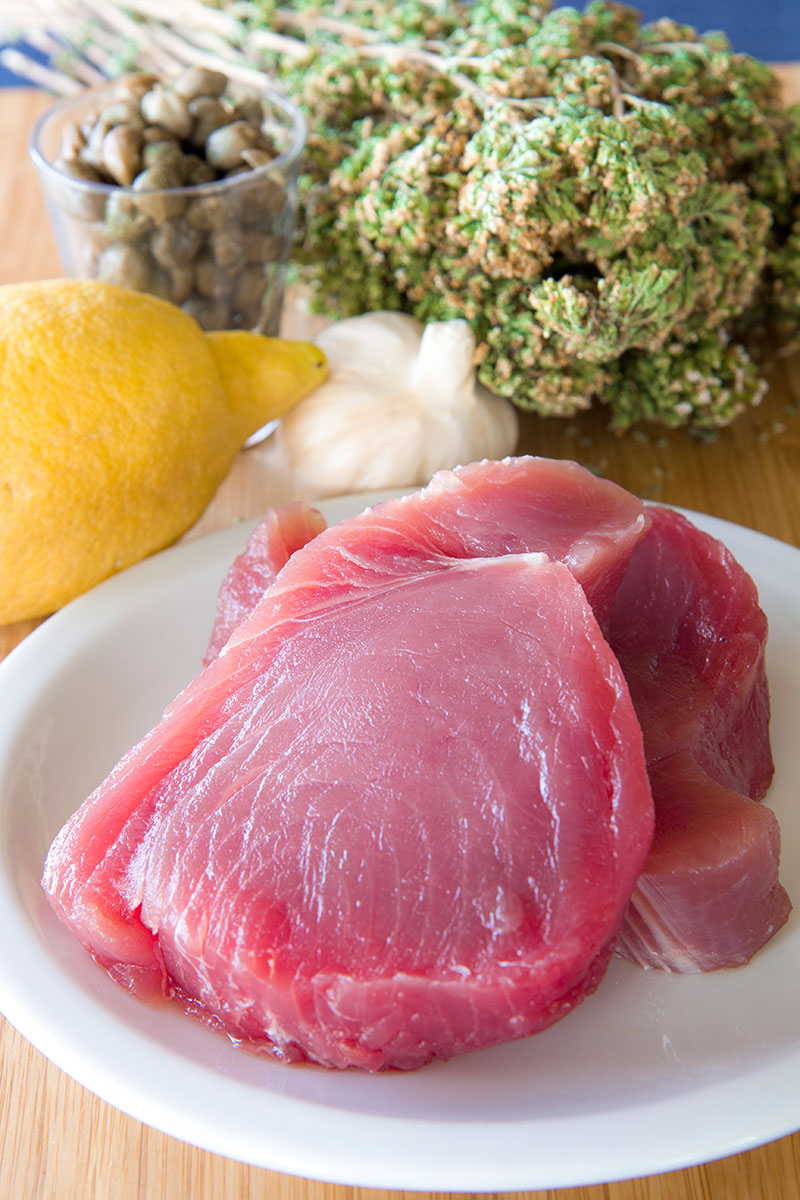 TAKE A LOOK AT THIS: 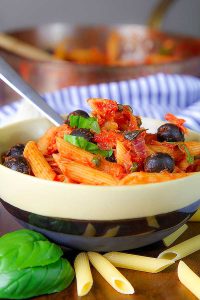